With temperatures soaring we decided to brave the heat and take a trip in the air conditioned car to visit the Sanctuary of Apollo and to tempt us all a  cool down afterwards an ice cream and picnic on the beach.  What else  !!

Getting out of the car the hot air hit us but fortunately the wind was also blowing so it took away the direct heat and helped us to enjoy the visit walking around the archaeological site.  Not quite as big as Kourion site but long enough to spend in the direct heat in the height of the summer.

The Sanctuary of Apollo Hylates lies west of the ancient city of Kourion (which we visited earlier in the year) and is one of the most important sanctuaries of ancient Cyprus. 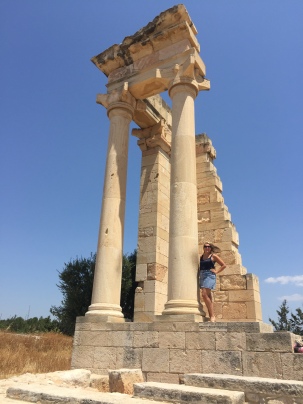 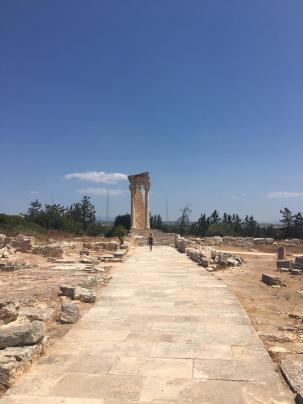 Apollo Hylates was considered God of the Forest and was the protector of Kourion and is believed to have been worshiped in the area since the 8th century BC. – in the 4th century AD.

This sanctuary was built in the Copper Age and was destroyed in 365 AD due to a strong earthquake in the area which also destroyed the ancient city of Kourion.  Of course this was not the end of the Sanctuary of Apollo as much of it was rebuilt again.

Today’s ruins date back to the 1st century AD. The site of the sanctuary is a palaestra (a wrestling school or gymnasium), a gallery, a treasury, the baths, the Archaic mosque, the circular monument, the central courtyard and the temple of Apollo. 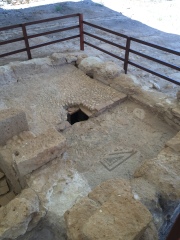 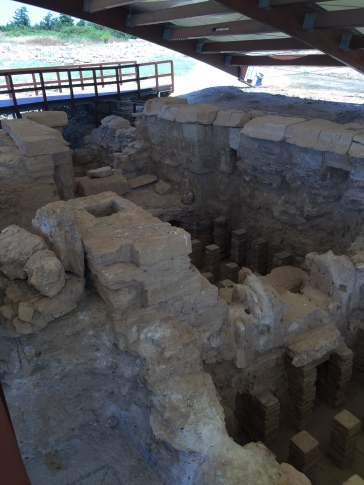 In the southeastern part of the sanctuary is the palaestra, a central courtyard surrounded by colonnades, which was the place where the athletes practiced. In the sanctuary there are also Roman baths. Both the baths and the palaestra are outside the main sanctuary.

The majority of the monuments, as they are today, belong to the restoration that took place in the temple in the 1st century A.D. and consist of the Temple of Apollo, the pilgrimage halls, the palaestra, a bath complex and the sacred enclosure.

Have a look at the attached YouTube video to get an idea of the size of the area.

Definitely worth a visit.  If you haven’t had enough history just further along sits The Stadium.  Kourion Stadium is the only ancient stadium found in Cyprus and dates back to the 2nd century,  the stadium had a capacity for 6.000 spectators and was the site of pentathlon events in ancient times. 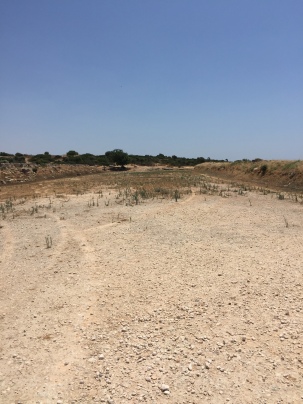