So what do you think of this amazing place!!  We just loved our visit to the ancient city of Kourion.  It definitely does make for a fabulous day out and there was no better time to visit this archaeological site than when Kate arrived for a week.

As we approached the gate to gain access to the site we passed on the right hand side what appeared to be caves when in fact they were ancient tombs….

View upwards towards the amphitheatre 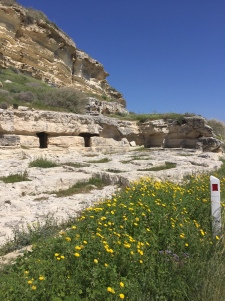 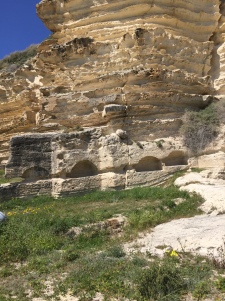 One of the main attractions of the ruins of Kourion is, without doubt, the large and very impressive amphitheatre from the 2nd century BC.  Although it was originally built as a theatre, it is believed that at some point in time it was used mostly for gladiator games.  In the centre photograph above it shows the entrance to the lower ground where it is believed that animals were kept before being lead into the arena.

Of course this is not all the original amphitheatre and what is seen now is an imposing curved auditorium that includes additions and renovations made during the 2nd and 3rd centuries, and which seats some 3000 spectators. The stage currently only preserves its foundations, but it originally rose to the full length of the auditorium.

Today the amphitheatre is a venue for cultural events that include music and theatrical performances during the summer months.  Perhaps there will be a performance on when you visit Cyprus this summer. 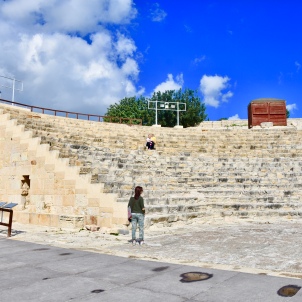 Kourion was an important city kingdom. It  consisted of many monuments, many of which date from the Roman period. Although the amphitheatre is the most impressive of them all the city also had a forum, the Nymphaeum, Public Baths, Fountain House, the House of the Gladiators and the House of Achilles. 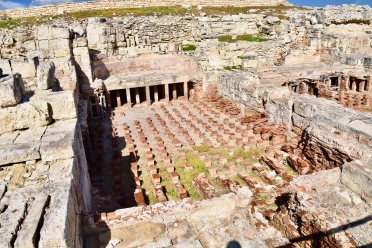 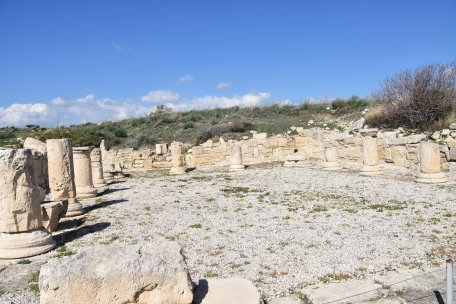 The total destruction of the village of Kourion and the death of more than 500 people was the result of a massive earthquake that shook Cyprus during the 4th century AD. Kourion suffered from numerous devastating earthquakes between the 3rd and 4th centuries AD, until a severe seismic event, believed to have occurred at approximately AD 365, had led to its permanent destruction.  Cyprus is still subjected to minor earthquakes which have no adverse effect on the population but of course the building method these days is very different to that in the time of the Kingdom of Kourion.

And of course the view from this once magnificent city was spectacular.