At last…………………….we did it!!
Well we have managed to complete our last project before the start of the busy summer season at Villa Corrado, the building of our pergola.  We decided to build a pergola to provide guests with shade during the hot summer months where temperatures in the height of the summer season sometimes reach the mid to high 40s.  I think I mentioned in my previous blog –  Villa Corrado Updates -there will still be lots of sun on the terrace for those guests who do not want any shade.

The building of the pergola was a one man job and all thanks has to go to my husband Philip who planned, designed and built it during the warmest temperatures we have had so far this year, 28 degrees.  Lots of climbing, cutting sawing and drilling was required. Of course I did provide some girlie help by painting all the wood before it was erected but the credit definitely goes to Philip.

We had 3 days to get it all done before our new guests arrived as many of the wood yards were closed and couldn’t deliver until the Wednesday following the Easter Break so it was pretty manic….trying to find a wood yard, getting it delivered and then getting it all painted before the building work could commence.

Below is where it all started …… from the supporting legs to the cross beams and on to the weave for the shade. 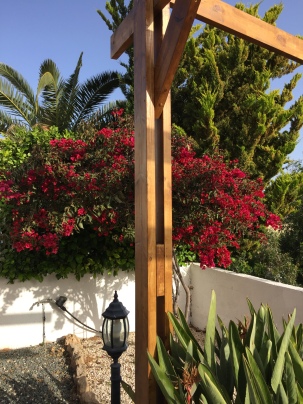 and the end result…..

All finished and furniture put back in place ready for our future guests to arrive. 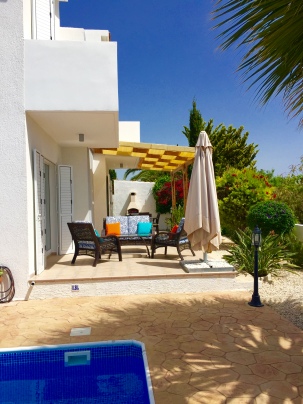 Why not follow the Villa Corrado blog to see what changes are taking place.   You may also get some news on what is happening in Coral Bay and  Cyprus.

Got up this morning to discover yet another Bank Holiday here in Cyprus………………………..

Cyprus National Day is a public holiday in Cyprus and is recognised on 1 April each year. It is also known to some as Greek Cypriot National Day 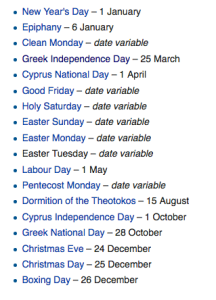 Cyprus was under British administration since 1878 after the island was handed over in an agreement with the Ottoman Empire for British military support, if needed, against Russia.

In the four years following, EOKA fought against British installations in Cyprus with bombings and armed warfare. The British troops were temporarily depleted due to the Suez Crisis but, in 1957, the British Army sent in extra forces and sought out the hideouts in the mountains.

During this time, Archbishop Makarios III was exiled.  In 1958, he agreed to accept independence only for Cyprus, rather than union with Greece, which was becoming more difficult to attain.  In February 1959, the United Kingdom, Turkey and Greece signed an agreement with Cyprus in Zurich and the EOKA guerilla forces disbanded.

The agreement declared that the State of Cyprus would become a republic with a Greek President, a Turkish Vice President, the national languages of Greece and Turkey, and its own flag. The agreement came into practical effect later in 1960.

In addition, many schools also hold tributes and programs in their classes around this time to educate the students about the history behind this event in the country.

Today the public holiday is largely a day of rest and relaxation for the people of Cyprus. In the lead up to the holiday, schools reinforce the lessons about EOKA and the Zurich Agreement. On the day, many attend religious services.